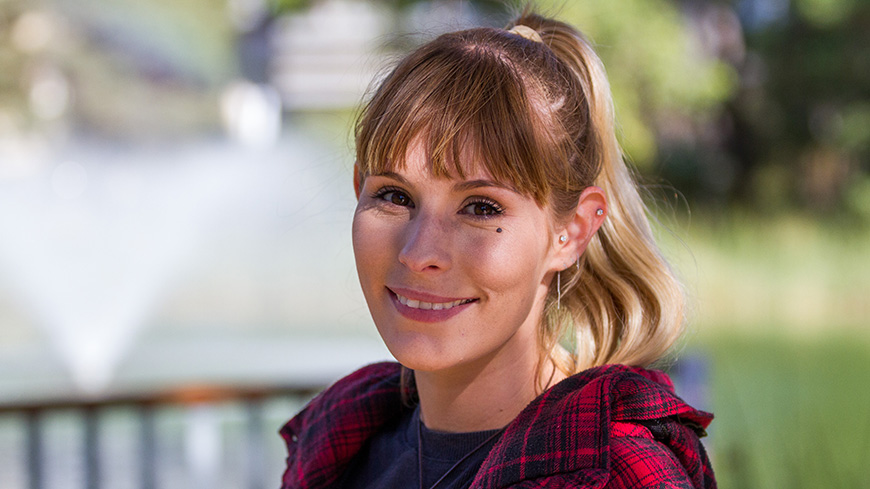 Meet Rebecca, Jayden and Tamara, three Aboriginal students from diverse backgrounds who all have something in common.

The three arrived at Edith Cowan University after very different journeys. But they each see education as a major step in reaching their goals.

Mentor program pays off for Jayden

When Jayden Gerrand was at high school he visited ECU and was inspired by a unique mentoring program designed to close the gap between Indigenous and non-Indigenous high school students’ finishing school and going to university.

He was so impressed he decided to join the program himself and is now a mentor leader with the Australian Indigenous Mentoring Experience (AIME).

“I went through the program when I was a high school student and got so much out of it. When a job came up I jumped at the chance to join the team and give back to my community,” Jayden said.

Born and raised in Perth, Jayden is Aboriginal on his mother’s side.

“Our mob is from the Nyoongar nation but we also have links to the Yamatji country,” he said.

He is currently in his second year of his double degree studying a Bachelor of Arts (Politics and International Relations) and a Bachelor of Business (Marketing).

“I’m thoroughly enjoying both my courses. I love the politics side and seeing how the world works, and I also love learning about business and marketing and how the economy runs. The two courses tie in quite well together,” Jayden said.

“I’m not sure what I’d like to do when I finish, perhaps start a business or maybe a career in international relations.

Rebecca Will’s interest in biology was first sparked when she worked as an administration assistant in the science building at Bunbury TAFE.

“After seeing all the labs and speaking to the students I decided I wanted to do that too,” she said.

Rebecca is now in her third year of a Biological Sciences degree at ECU.

“I have learned virtually everything to do with cells and molecules, and now it’s hard for me to look at any living thing without accidentally flooding my head with things I remember from my lectures about rocks, plants and animals.

“Then I wonder why I couldn’t remember them in my exams!” she joked.

Rebecca is a Bayjima woman from the northern areas of Western Australia. She grew up in small towns up and down the coast. Now her studies at ECU are allowing her to see more of WA and the rest of the world.

“Last year I participated in a student exchange to the University of Agriculture in Beijing, which was an unforgettable trip, and this year I’m going to the Gascoyne region during the winter break. I’ll be getting to meet an Aboriginal Elder who will tour our class through the region,” she said.

Diabetes no barrier for Tamara

Tamara Glynn was originally interested in becoming a medic in the air force when a diagnosis of type 1 diabetes closed that door. But fortunately another one opened.

Tamara is currently in her second year of a Nursing degree at ECU. She is Aboriginal on her mother’s side with links to the Dunghutti people of the Mcleay Valley region of NSW.

“Luckily I had enrolled in ECU even before I found out I had diabetes because I was also interested in nursing,” she said.

The science aspects of her course and the practical components are what Tamara’s enjoying most.

“I enrolled in nursing because I want to be able to help people, and the science aspect of my course is really good. It’s why I chose a Bachelor of Science (Nursing) at ECU over other universities.

ECU is a leader in finding ways for people to get into university. ECU welcomes Aboriginal and or Torres Strait Islanders to enquire about becoming ECU students. Visit the ECU Indigenous studies webpage for more information.