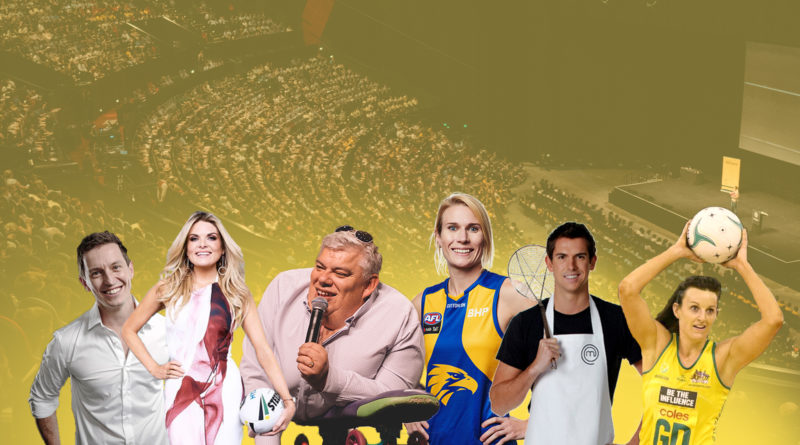 Halogen Australia has released the line-up of speakers who will inspire students at the upcoming National Young Leaders Days (speakers listed below).

The National Young Leaders Day is Australia’s largest gathering of young leaders and is an annual event on the calendar of thousands of schools. It provides a unique opportunity for students to gather at world-class event venues to hear some of Australia’s most influential leaders share insights from their own leadership journey.

There are two noticeable features in the line-up. Firstly, there are numerous speakers who are travelling to speak at multiple events, giving students in all cities the unique opportunity to hear from high-profile interstate speakers. Secondly, there is a significant proportion of strong female role-models amongst those who will share their story with Australia’s upcoming young leaders.

Erin Molan has been a prominent host on Channel 9 for almost a decade. She is currently the Weekend News sports presenter and host of popular entertainment program 20 to One. Erin has been a trailblazer for women in sports media, highlighted by becoming the first female host of the NRL Footy Show in 2014. She is also the host of the Sunday Footy Show, match broadcasts, and numerous popular radio programs. (Appearing in Sydney, Brisbane and Melbourne) Rove is one of the most successful comedians and TV presenters that Australia has ever produced. In addition to being a triple Gold Logie winner, Rove is a radio host, TV producer and a children’s author. As a TV host Rove has interviewed the world’s biggest names in sport, music, film and even royalty. Being the scenes, Rove started a production company, most known for producing ‘The Project’ on Channel 10. In recent times Rove has used his humour and artistic talents to create very entertaining children’s books. (Appearing at Sydney Primary and Melbourne Primary) Bianca Chatfield leaped onto the world stage at 18 years of age, by being selected as one of the youngest players in history to debut for the Australian Diamonds. Her decorated netball career involved winning World Championships, gold and silver medals at the Commonwealth Games, and MVP awards. Since retiring from Netball in 2015 Bianca developed her renovation skills on The Block (alongside fellow Netballer Carla Dziwoki), and can be seen on Fox Sports, ABC and Channel 9 as a host, panellist and commentator.  She has a passion for developing young leaders, which has seen her publish a book and launch a leadership mentoring program. (Appearing at Sydney, Brisbane, Melbourne and Adelaide) 2 years ago John Coutis was by far the most popular speaker at the National Young Leaders Day. He is back… and will be at all NYLD cities across Australia for the 2019-2020 series. Despite having no lower part of his body, John embraces a full life, encouraging millions of people each year to find their own strengths, develop resilience and take opportunities. (Appearing at all events) Eamon Sullivan made his Olympic debut in Athens as a member of the 4 x 100m freestyle relay. Eamon swam his way to the top of the world sprinting ranks, as he became the World Record holder of the 50m and 100m freestyle in 2008. Out of the pool, Eamon has become one of Australia’s most recognizable faces. Post Beijing Olympics, Eamon brought together two of his keen interests, cooking and the media, as a contestant on Network Ten’s Celebrity MasterChef. He proved to be a hit in the kitchen, impressing the judges to win the competition and be crowned Australia’s first Celebrity MasterChef. (Appearing in Perth) Dana Hooker has been a dominant player in the AFLW competition since the league began in 2017. After being selected twice for All-Australian honours, she was one of the first players signed by the West Coast Eagles as they prepared for their first year in the AFLW. Dana is regarded as one of the pioneer players in women’s AFL, playing for both Melbourne and the Western Bulldogs in the exhibition matches in the years leading up to the commencement of AFL league. Dana went on to win the very first Best and Fairest award for the Fremantle Dockers. Dana’s leadership ability was one of the reasons that the West Coast Eagles recruited her in 2019, recognising that she offers much on the field, but also would provide great leadership to the club’s younger players. (Appearing in Perth)

There are additional speakers for each event. For the full list, event details, and registration go to: www.halogen.org.au