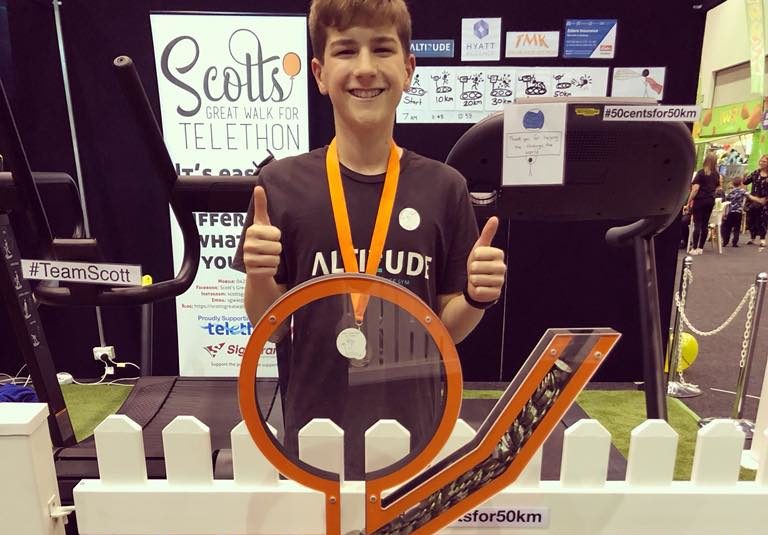 Scott Guerini takes lots of steps… and all for charity.

Scott lives in Perth, Western Australia, and has become an influential fundraiser for Telethon. The well-known charity uses funds to support project and services linked to the Perth Children’s Hospital.

When Scott was 4 years old he told his family he wanted to walk 25km to help sick kids. His family told him he wouldn’t be able to make it, but Scott never doubted himself and told everyone he could.
He was right, he did make it, the whole 25km in 8 hours and 40 minutes. Thank goodness Scott believed in himself for that first walk! He’s had everyone else believing in him ever since!

Since 2010 Scott has initiated a number of fundraising projects, all centered around walking.

This year, over the two days of Telethon, Scott walked 75 kilometres on the treadmill inside the Perth Convention Exhibition Centre. Keep in mind, Scott is only 12 years old. In total Scott has now walked over 571km over 9 events and he’s raised $150,000.

“It’s easy to make a difference, what can you do?” says Scott.

As part of this year’s fundraising, Scott asked the people of Perth to collect their 50 cent pieces and donate them towards Scott’s Telethon total to support his ‘Treadmill Challenge’. What an amazing response he had! Just over $1,000 was collected over the Telethon weekend in Scott’s two giant stickman money boxes (pictured). This was added to the many other ways that people supported Scott through generous donations to Telethon.

To find out more visit https://www.scottsgreatwalk.com/